Design a site like this with WordPress.com
Get started
Skip to content
s2stats Uncategorized June 18, 2020June 18, 2020 2 Minutes

Leaving aside the ridiculous ball-in-the-net-that-wasn’t incident . . .

Despite looking rusty as hell, there was a lot about Sheffield United’s performance at Villa that was familiar last night.

The key issue, however, was a failure to turn overall possession into something that could create chances.

The Blades had a lot of possession (53%), of which a lot was relatively high up the pitch (see average line stats left) and which resulted in a higher final third pass count than Villa (deep completions 20 vs 15).

All that is pretty familiar, as is the bias towards multi-pass sequences high on the flanks, especially the right.

But while the Blades had more passes than the opposition in the final third (20 vs 15), Villa had way more touches in the penalty box (23 vs 11).

That kind of stat — passes in the final third not being translated into passes in the box — was a familiar story for the Blades early in the season and I wrote about it here. The good news from that story was that Sheffield United had tended to become more direct, with touches in the box equalling or outweighing final third passes.

So, why didn’t United play as directly at Villa as we’ve been used to seeing? Numerous potential reasons:

Having said all that, many patterns of play were familiar if not as well-executed as we’ve seen previously and while many players looked less than fully match fit/sharp, there were some individual bright spots from the likes of Jack Robinson and Deano.

The numbers show PPDA. That is, opponent passes per defensive action, all of which can be seen on the pitch maps. 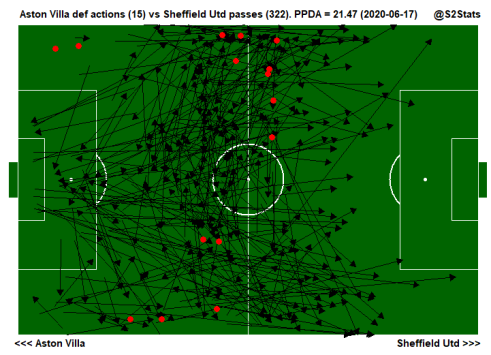 Running to get fit for football? Worked for me

I’ve long thought you don’t necessarily get good at things by just doing those things. I mean, for example, no musician would expect to play gigs by only ever playing gigs. Things involving motor skills need a lot of practice, in particular using repetition, focussing on difficult sections etc. Likewise in football, I don’t think […]

What’s happened to Sheffield United this season? Is it possible to pin it down to one or very few key stats? Maybe. In this case I’d say it’s getting the ball into the final third and keeping it there. Or the lack of it. And it looks like three key players – two injured, one […]

Leaving aside the ridiculous ball-in-the-net-that-wasn’t incident . . . Despite looking rusty as hell, there was a lot about Sheffield United’s performance at Villa that was familiar last night. The key issue, however, was a failure to turn overall possession into something that could create chances. The Blades had a lot of possession (53%), of […]

Lockdown training in a 5×5 garden? No problem

With no chance of playing football or training, me and my U13 little fellah have been practising in our 5×5 bit of astro three times a week. The aim of these training sessions is to maximise touches, using lots of surfaces of the feet and covering lots of movement patterns/body shape. Key things to remember: […]

It’s a great thing when something pops out unexpectedly from a plot. And even more so when it shows how data can help show the value of the less expected gems among players. Here we have a plot of PL goalscorers that shows expected goals totals and volume of shots. What struck me was how […]